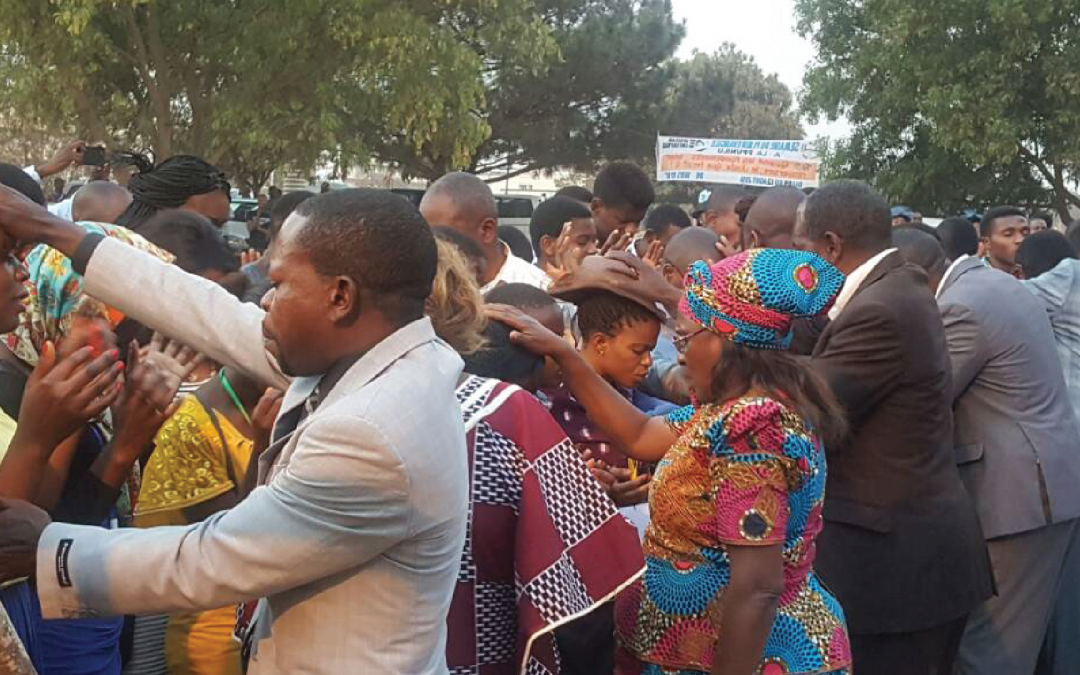 “Overall, 6,000 people were reached with the Gospel, with 700 completing decision cards, and 300 being actively discipled post-mission.  Praise God that he kept all local and international evangelists safe during this time.”

The DRC, formerly known as Zaire, is the largest sub-Saharan country in Africa with a population of over 78 million people. As of 2018, around 600,000 Congolese have fled to neighbouring countries of Uganda, Rwanda, Burundi, Tanzania, Zambia, Congo and South Sudan due to conflict.  The fighting has displaced over 4.5 million people, with approximately 2 million children risking starvation. There is significant influence of occult movements in major cities, that seek to entice young people through jobs and corruption. It is in this context that African Enterprise held its mission in Lubumbashi, DRC’s second largest city known for its mining and student community, between August 4 -12 2018.

Lubumbashi is a very strategic city, where many leaders have been trained at universities due to the high quality education standards that have prevailed.  The mission was orientated toward university students, with the support of academic leaders at DRC’s most prominent university, Universite de Lubumbashi. AE team leader Leonard Kiswangi worked hard to unite churches in this mission. 50 churches originally signed up, unfortunately some were not able to participate due to issues around city conflict.

Overall, 6,000 people were reached with the Gospel, with 700 completing decision cards, and 300 being actively discipled post-mission.  Praise God that he kept all local and international evangelists safe during this time.

Please continue to pray for this city, and the people living in permanent fear about the safety of their families, especially leading up to the election on December 23rd 2018.  There is also a great need for pastor training and bibles in the city, and we are actively praying that the Lord would answer the call of His people in need in this city.

Leonard’s particular prayer points are for a car and for office furnishings so that he is suitably equipped to continue mission in this challenging environment.

Learn more about the DRC here.

Partner with us through giving.

UN’s Sex Abuse Scandal is a film that dateline recently published which shines a light on the sexual abuse suffered by women in both the Central African Republic and the Democratic Republic of Congo at the hands of United Nations peacekeepers. Find out more and view the film here. Please note the film is difficult viewing.

Being Salt and light in the most difficult circumstances

At the entrance of the Buskenyi slum in Western Kampala stands Nakulabye West church of Uganda. The side walls of the church actually form one side of the slum gateway, and the back of the church overlooks the slum proper.

The Importance of Prayer in Mission: Kampala

City outreach and stratified evangelism began this morning with our team being invited to speak to the police officers in the Old Kampala Police Headquarters. The mission team arrived as the officers were completing their morning march.

When AE Uganda began preparing for this mission over a year ago, they found that there were deep divisions in the local churches and some refused to work together at all. Before we could do effective outreach to the city, we first had to help heal the divisions within the churches.